Come winter, Raynham Girl Scouts could have a new, expansive venue for their meetings, craft sessions and cookie sales. But they would meet in an unusual function room.
Construction on the 185-foot tall, $60 million Buddhist temple on South Street East in Raynham is nearing completion, and project leader Paul Chapple said he believes it will become more than a place of worship as Raynham residents will be invited to host events in the spacious building.
“Community events, things like Scout meetings, community meetings and productions,” said Chapple. “This facility should be something the town is able to use.”
Construction on the Wat Nawamintararachutis NMR Meditation Center began in September 2011. Once completed, it will be the largest Thai Buddhist temple outside Bangkok and the tallest structure in Raynham. Chapple predicts construction will be finished by the end of the year.
As crews wield hammers, gold-coated statues of a Sukhothai period, or 14th century, Buddha sit amidst plaster and bare floors, awaiting a temple that will display their glory. Wat Nawamintararachutis was commissioned to honor Thailand’s King Bhumibol Adulyadej, also known as King Rama IX in English, who was born in 1929 in Cambridge. Private donations and the Thai government financed the project. The temple will be the home to at least 32 Thai Buddhist monks, who will move into the building to live in dorms within the next month. While construction was originally set to wrap up by September, progress has been stalled as Thai contractors await their work permits. But as the temple rises and more and more rooms are constructed, its future beauty is easy to imagine. 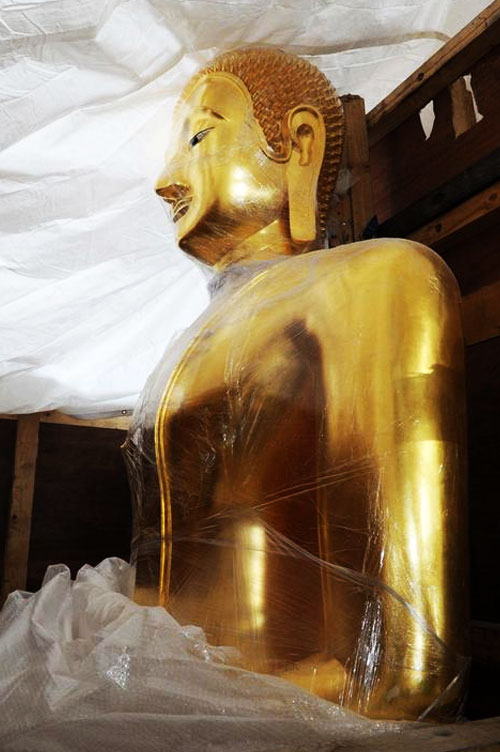 The temple will feature multiple bronze-cast statues of Buddha, which are covered in gold. These 3-ton giants were prefabricated in Thailand, along with many of the interior features.
A solid brass grand staircase will be installed shortly, a piece of art Chapple describes as “beautiful … you couldn’t do it in this country.”
From marble floors to reflecting pools, the temple will allow the monks a place to live, gather and worship. Local residents will also be invited to enjoy the beauty of the temple.
“People will be able to come here, if they want to learn how to meditate,” said Chapple.
The complex will also include a museum focused on the king that is open to the public.
“We want to set up a lasting structure for communication between the monks and the town, and be sharing this place,” said Chapple.

Building the temple has been a grand undertaking, with three different contractors and two architects working on the 110,000-square-foot complex. Construction should wrap up in December, Chapple said. 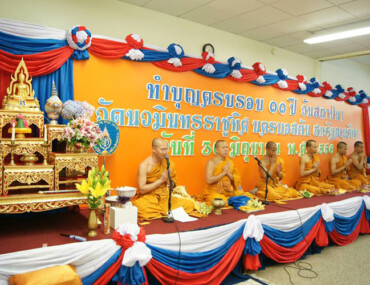