Thai Buddhist monks who perform their religious mission and Thais who reside in the US are grateful to His Majesty King Bhumibol who does his duties for the benefits and well being to the nation and all Thais. In addition, he is the king who is a great patron of Buddhism. He is the only king who was born overseas; he was born at Cambridge, Massachusetts, United States of America. Therefore, there was a meeting at 775 Newton Street, Chestnut Hill, MA 02467 on June 25, 2002.

There was an agreement that to celebrate His Majesty the King 60th anniversary in succession to the throne on June 9, 2006 and the 80th anniversary of his birthday on December 5, 2007, the Buddhist monastery should be founded in the same place where the king was born. The proposed construction can serve as the center of spirituality. It can bring benefits and peace for the international communities and the humanity as a whole. To honor the gracious occasion, the monastery was named Wat Nawamintararachutis, The NMR Buddhist Meditation Center.

Timeline of the Project

Buddhists in Massachusetts approved the proposal made by Mr. Joseph A. Milano, Thai honorary consulate in Boston. They had established the NMR Thai Cultural Center of Massachusetts, USA in this monastery for benefit to the Thais and the world.

At the same time the permission was requested from the US government to register as non-profit organization. The approval was granted by the Commonwealth of Massachusetts US government on July 21, 2002. The Buddhist Supreme Patriarch of Thai Sangha kindly accepted this project under his patronage on November 5, 2005.

Venerable Phra Promwachirayan the president of the committee kindly hosted to purchase the land for the project as tribute to His Majesty the King.

1.   To dedicate good deeds to His Majesty the King of Thailand.
2.   To be the center of Dhamma dissemination and the Buddhist Meditation Center.
3.   To promote and disseminate moral, virtues, Thai art, culture and traditions and customs.
4.   To be the center of spirituality of all Buddhists in performing good deeds for benefits and peace of societies, nations and the world.

The project is supervised by:

This monastery construction project although under the United States law is supervised by the Ecclesiastical Council of Thailand and it seeks after the royal patronage from the Royal Household Bureau and Thai government.

It started from 2002-2007. Necessary sources were prepared and steps were taken to construct the Buddhist monastery. The qualified persons were selected, invited, and appointed as board of directors, executive committee, committee, and board of supporters and advisors in America as well as board of directors and board of supporters and advisors in Thailand. Simultaneously five to nine Buddhist monks were invited to perform their religious missions at the temporary abode. The missions included training, doctrine dissemination, meditation teaching, and Thai culture teaching. Land plot was secured for the construction. Appropriate design was done to suit the environment and law of State in America. Permission from the local city and town was sought for the purpose of constructing the monastery.

It starts from 2014-2018 to perform religious activities and various activities. It will continue until the completion of the project.

1.  Buddhism is recognized as a religion of cause and effect, wisdom, loving-kindness, forgiveness, harmony, and concord for peace and happiness. Buddhism is embraced and practiced by people in their daily living.
2.   Glory of Chakri dynasty and His Majesty the King Bhumibol Adulyadej of Thailand who born in this region is spread farer and wider.
3.   Buddhist Thais in abroad have conscience, esteem, love, and gratitude for the Monarchy, Buddhism and the Nation.
4.   New generations of Thais have close ties with the place of their birth, race and pride in Thainess.
5.   New generations of Thais know the principles in living their lives in accordance with Buddhist doctrine.
6.   The monastery serves as the center of spirituality which leads to the right action.
7.   Moral, virtues, ethical conduct, Thai art and culture, traditions, and customs are promoted and passed on to the next generations of Thais and resident Americans who will appreciate love, and harmony and bring about sustainable peace and happiness.
8.  Buddhist relations are established which will be happiness and peace to society and the world as a whole from the fruit of this project.

The new temple, to be built on a site of approximately 55 acres, is to be the largest Thai Buddhist temple outside of Thailand. The temple’s design was led by ARC with associated design architects from Thailand.

The Design focus is on the central axis which celebrates the roof gables. The massing of the multi-tiered gables reduces the massiveness of the structure and is characteristic both of traditional temples in Thailand and to rural New England architecture.

The Centerpiece of the complex is the three story temple. The Chedi (steeple) is its most prominent feature and pays tribute to Buddha. It is painted gold and reaches a soaring height of 185 feet.

The temple represents the realization of a dream for the Thai people who hoped to build a sanctuary in honor of their monarch, King Rama IX, Bhumibol Adulyadej, who was born in Cambridge, Massachusetts in 1927.

The temple and Meditation Center will serve both the Thai community as well as it neighbor as a place of solace. It will also host events and provide education about Buddhism and Thai culture.

To support the project please use this form.

May you be blessed by the power of the Triple Gem (the Buddha, the Dhamma and the Sangha). May you have good health, beauty, happiness, success and prosperity. May all of these blessings be yours and may all of your wishes be fulfilled.

Do You Need Meditation and Practice?

Meditation focuses on maintaining quietness of our busy mind. The effect is to direct our concentration to one healing element 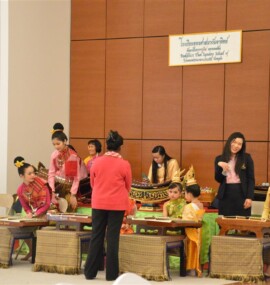 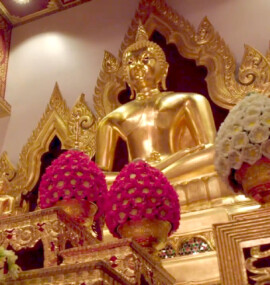 You are cordially invited to join us during these special events. There will be wonderful Thai cuisine, traditional Thai music and dance performances, and warm-hearted greetings from all of your new friends. Actual dates and…

You are cordially invited to join us during these special events. There will be wonderful Thai cuisine, traditional Thai music and dance performances