At Wat Nawamintarachutis we enjoy many activities throughout the year. These include celebrations, ceremonies, and festivals.

The year begins with the New Year celebration in January and Magha Puja Day in February or March. We celebrate Thai New Year, the so-called Songkran Day in April and Visakha Puja Day in May. From July to October we observe the Rains Retreat Holiday beginning with Asanha Puja Day and Vassa (Thai: Wan Kao-Pansa) and ending with the Katina Festival. We commemorate the Queen’s birthday (Thai Mother’s Day) in August; Wan Piyamaharat and Ok-Pansa in October. We celebrate Loy Krathong festival in November and the King’s birthday (Thai Father’s Day) in December.

You are cordially invited to join us during these special events. There will be wonderful Thai cuisine, traditional Thai music and dance performances, and warm-hearted greetings from all of your new friends. Actual dates and times and details will be announced on the website: www.watnawamin.org prior to each event.

For the children, we offer Sunday school classes. There is tutoring in Thai language, Thai culture, and intensive activities of summer school program.

For children and adults of all ages, we offer traditional Thai dancing lessons and instruction on classical Thai musical instruments.

If you are interested in any of the above activities, please call the phone number or visit the website on the back of this booklet for more information regarding dates and times.

Here are a few rules of etiquette to assist you with becoming familiar with Thai Buddhism and culture. We always take our shoes off when entering the main Buddha Hall and avoid sitting with our feet pointing at the Buddha statue.

Wat Nawamintararachutis – the NMR Buddhist Meditation Center (in short “Wat Nawamin”) was established in 2002 in honor of His Majesty King Rama IX of Thailand (King Bhumibol Adulyadej the Great) who is the only monarch to have been born in the United States, to celebrate the 60th anniversary of his coronation on June 9, 2006 and his 80th birthday on December 5, 2007. Wat Nawamintararachutis serves as a place for people of all races, nationalities, and backgrounds to benefit from Buddhist meditation and practice according to the doctrines of the Lord Buddha.

Wat Nawamintararachutis also serves as a Thai-American cultural center. There are classes given in Thai language and etiquette, traditional Thai musical instruments and Thai dancing.

These activities are not only designed to assist Thai-American community in preserving their traditional cultural heritage, but also many Asian-American have found comfort away from home at Wat Nawamin.

On June 25, 2002, a group of Thai resident who live in Boston, Massachusetts and surrounding areas in the United States held an official meeting with their interest in founding a Theravada Buddhist temple in honor of His Majesty King Rama IX of Thailand, who was born on December 5, 1927 at Mount Auburn Hospital in Cambridge, Massachusetts. The group enlisted the support of Venerable Phra Phromwachirayan, the abbot of Wat Yannawa – a royal temple in Bangkok, who had helped establish Wat Dhammaram – a Buddhist temple in Chicago and developed other Thai Buddhist temples in the USA.

Wat Nawamintararachutis was inaugurated on August 1, 2002 as a Theravada Buddhist temple of the Mahanikai sect at the apartment address: 1765 Commonwealth Ave, Brighton, MA 02135. On June 1, 2003, the temple moved to a house address: 11 Wilmot Street, Watertown, MA 02472, and finally, has officially moved to its permanent location at 382 South Street East, Raynham, MA 02767-5130 on July 1, 2006 where a proper temple complex can be built with facilities for monks, a meditation center, and a cultural center for Thai arts and learning.

Wat Nawamintararachutis is registered as a nonprofit organization, the NMR Buddhist Meditation Center. “Wat” is the word for temple in the Thai language. The name itself is, characteristically, a composite of several Sanskrit words. As a whole it means “the Temple of the Great King Rama IX.” For convenience the temple is simply called “Wat Nawamin.” 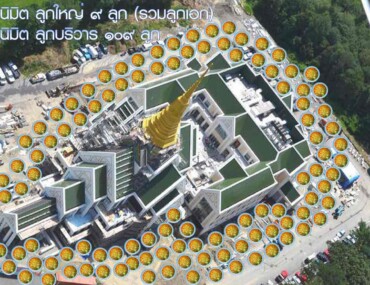