Visākhapūjā (Vesak) means the worship of the Buddha on the full moon day of the sixth lunar month. It usually falls in May. In the case of a year with Adhikamāsa (a year with an extra eighth lunar period) the Visākhapūjā Day falls on the full moon day of the seventh lunar month.
Visākhapūjā is one of the most important days in Buddhism because of three important incidents i.e. the birth, the enlightenment, and the passing away of the Buddha. These three incidents miraculously fall on the same month and date. Each year on the Vesak full moon, throughout the world, Buddhist monks and laymen gather together to perform the worship in a very special way and to recollect the wisdom, purity, and compassion of the Buddha.

The Buddha was a king by birth. His clan name was Gotama. He was born in the Sakya kingdom, eighty years before the Buddhist Era, at Lumbinī Park (now called Rummindei, in Nepal) in the Middle Country (Madhyama Pradeśa, located between Kapilavastu, capital of the Sakya Kingdom, and Devadaha, capital of the Koliya Kingdom, on Friday, the Vesak full moon in the year of the dog.
Prince Siddhattha (the Buddha’s personal name) was the son of King Suddhodana and Queen Sirimahāmāyā. Slightly before his birthday, a very pregnant Queen Sirimahāmāyā wanted to pay a visit to Devadaha which was her native country. In the morning of the Vesak full moon, the Queen left Kapilavastu on a visit to Devadaha. Approaching a lovely park of Sal trees called Lumbinī, located between the two capitals but nearer to Devadaha, the Queen started contractions and gave birth to a son when she arrived at a Sal tree. When the Kings of Kapilavastu and Devadaha learned of this, they were very happy and arranged a procession to welcome the Queen and her baby back to Kapilavastu.

Prince Siddhattha was brought up in the midst of luxury, led the happy life of a privileged youth and married at the age of 16 to Princess Yasodharā or Bimbā who bore him a son, Rāhula. He discontented and took on the life of a wandering ascetic at the bank of the Anomā River. He was then 29.
Prince Siddhattha studied the mystic practices of the foremost Brahmin ascetics and realized that such practices were not the way to enlightenment. He went on his own way applying the reflective thought of conscious meditation to a rational simple life of moderation.
At the age of 35, he attained Enlightenment at Uruvelasenanigama subdistrict, Magadha State (nowadays, located in the area of Buddha Gaya, Bihar State, India) on Wednesday, the Vesak full moon of May, the year of the cock, forty five years before the Buddhist Era.
The Dharma discovered by the Buddha was Ariyasacca or the Four Noble Truths, namely:

These four are called the Noble Truths.
After having attained Enlightenment, the Buddha wandered from place to place teaching his discoveries to people who are accessible to instruction, helping large numbers of them achieve various levels of spiritual attainment. He sent his followers to teach Buddhism in capitals, cities, and upcountry, until Buddhism was firmly established and widely spread.

The Buddha passed away on Tuesday, the Vesak full moon in the year of the small snake under the two Sal trees in the Sala Grove of the Mallas in Kusinārā, capital of the Malla State (nowadays located in Kusinagara of Uttarapradeśa, India) at the age of eighty.
The ceremony of the rituals on Visākhapūjā Day had been continuously observed in Jambūdīpa or India, the motherland of Buddhism, for a long time before Buddhism spread to Thailand and Sri Lanka. There, the Visākha worship has been continually observed to the present day.
In Thailand, Visākhapūjā observance began during the Sukhothai period (around the 13th century) because of the close religious relations between Thailand and Sri Lanka. Sri Lanka monks came to teach Buddhism in Thailand and were highly respected. Thai monks also went to study Buddhism in Sri Lanka. It is believed that in Thailand the Visākhapūjā observances started during the Sukhothai period and had been introduced by monks.
In the book of the Royal Twelve-Month Rituals, written by King Rama V (C.E. 1853- 1910) of the Chakri Dynasty, the Visākhapūjā observance was said to have been revived in the Ratanakosin period in the year of the ox, B.E. 2360 (C.E. 1817), in the reign of King Rama II. Under the advice of Somdejphrasangharaja Mee (the Supreme Patriarch) the King revived the Visākha celebration.
His Majesty King Prabuddhaleudlanaphalai (King Rama II) declared the commemoration of the Visākhapūjā through a Royal Decree. The King, himself observing the eight precepts, enjoined abstention from killing and the consumption of alcohol for three days. During those days, there were bright lights, flowers, joss sticks and candles, offerings as well as fireworks to celebrate the Visākhapūjā day. In addition, people made a triple circumambulation around the Uposatha hall or a place of worship and listened to sermons. They also made merit, offered food to the monks, donated things to the poor, released animals and decorated their houses with lights and lamp. These rituals have been observed ever since on the Vesak full moon day.

Activities to be observed on the Visākhapūjā Day

Visākhapūjā (Vesak) is an International Day of the United Nations

On December 15, 1999, the United Nations (an international organization of countries created to promote world peace and cooperation) has unanimously resolved to declare the Visākhapūjā Day (Vesak Day) as an International Day. This declaration has brought lots of joy to the worldwide Buddhists including Thais and the Thai Government. Regarding this, the public sector, Sangha, and Thai people all have held the Buddhist Promotion Week in the Vesak festival throughout the country. 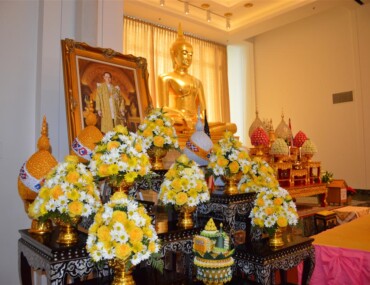 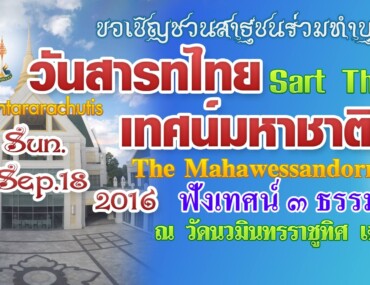